Neighbourhood Forums are all about bringing together residents, local businesses, elected Councillors and the Council planning officers to work collaboratively on a Neighbourhood Plan. This deals with local planning issues, sitting alongside and complementing the higher-level planning policies of the Council and national planning policy. The idea is to build bridges in what can be a conflict-filled planning and development system.

Find out how it works by watching our intro video- just 7 minutes of your time! Also, why not come along to our AGM on 27th Jan 2015 to have a chat with Forum members and see if you want to get involved.

Sneinton Neighbourhood Forum is busy building bridges- with a membership made up of residents, local businesses and community groups, and two local Councillors (joining is easy). However, one of the difficult first steps is to set up a boundary- to define where the influence of the Neighbourhood Plan and Forum starts and ends.

the areas outlined in green on the plan below. 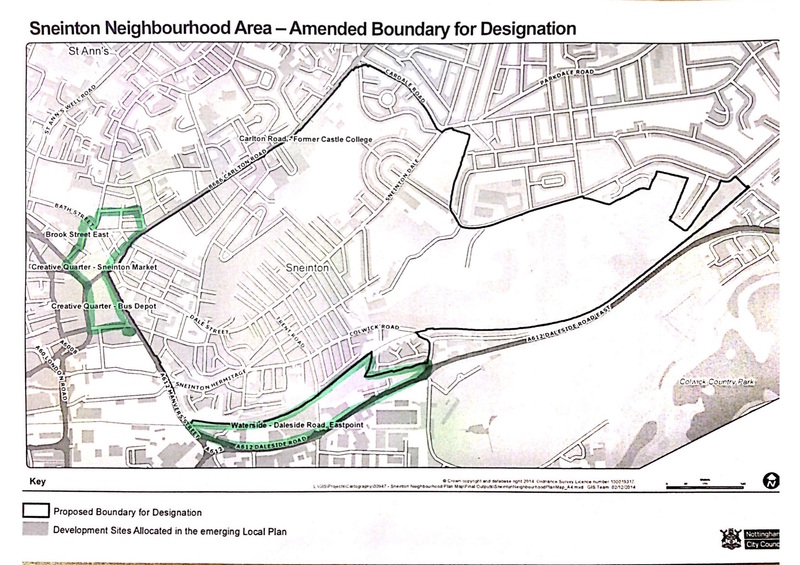 These are crucial areas for planning the future of Sneinton, because they form the connections westward to the City centre and southwards to the River Trent and the planned Waterside Development. These are connections that have been cut historically by the railway and poorly planned development beyond Manvers Street and Carlton Road, leaving Sneinton isolated from the areas around it. Ever tried walking to the City Centre or the River Trent from Sneinton? Then you'll understand the problem!
The Council's proposed area would reinforce this isolation rather than help put Sneinton back on the map- which is why they were included in the Forum's plan area in the first place.
From what we understand, the Council want to exclude these areas because they have been identified as 'Development Sites' in the Local Plan that the Council is putting together, and they fear that commercial developers might be put off by the extra burden of having to deal with a Neighbourhood Plan as well as the Council's Local Plan.
Fortunately these fears are unfounded, as Neighbourhood Planning is designed to fit very well with Council's Local Plans: it deals with issues of local concern and not the 'Strategic level' concerns of the Council's policy. The whole idea is to encourage developers by clearly setting out ways that they can get the 'buy in' of the local community- by meeting the Neighbourhood Plan they can escape from the old-style confrontation with locals that has blighted the planning system in the past.

Find out how it works by watching our intro video- just 7 minutes of your time!

In other areas, any concerns about who is responsible for what when it comes to Local Plan Development Sites has been solved by a simple agreement- a "division of responsibilities" between the Council and the Neighbourhood Forum. You can see an example of this below. Should the Council decide that they don't want to take this approach, and simply remove the areas from the plan boundary, then the planners have set out these three options for the Forum:

1. Like it or lump it option- just do what we can within the reduced area (seems a bit pointless if we can't tackle the problems that inspired the idea in the first place!)
2. Dissolve the Forum if we decide that it is pointless without the areas that have been removed.
3. Go for a Judicial Review of the Council's decision (it's expensive... crowdfunding anyone?!)

What we obviously hope is that none of this is needed and we can move forward with a simple, clear and collaborative approach like the one set out in the example below. Those Councillors not already members of the Forum are entitled to join and get involved; if you want to invite them personally and try to persuade them of the need to keep the full Neighbourhood Plan boundary- why not attend one of their surgeries and let them know?

Building bridges AND setting boundaries really could be that simple! 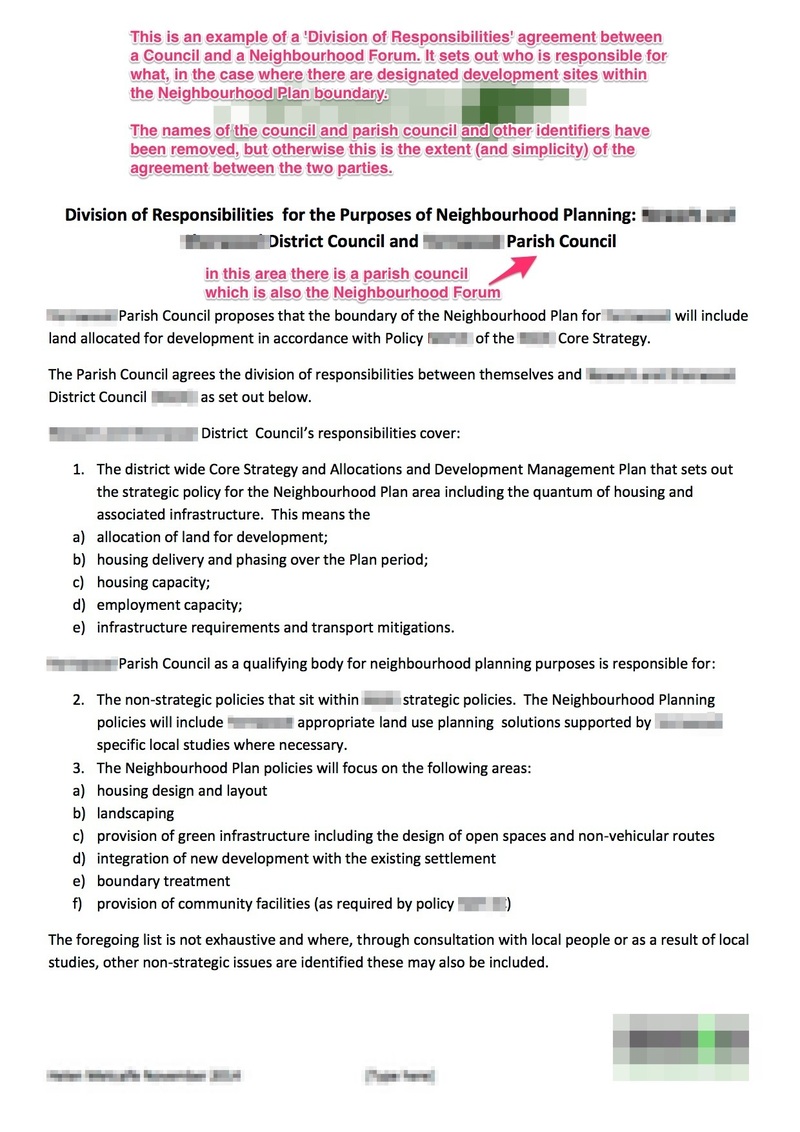