There was a great turn out on Thursday night for the 'Our Sneinton' event brought to us by Sneinton Alchemy. 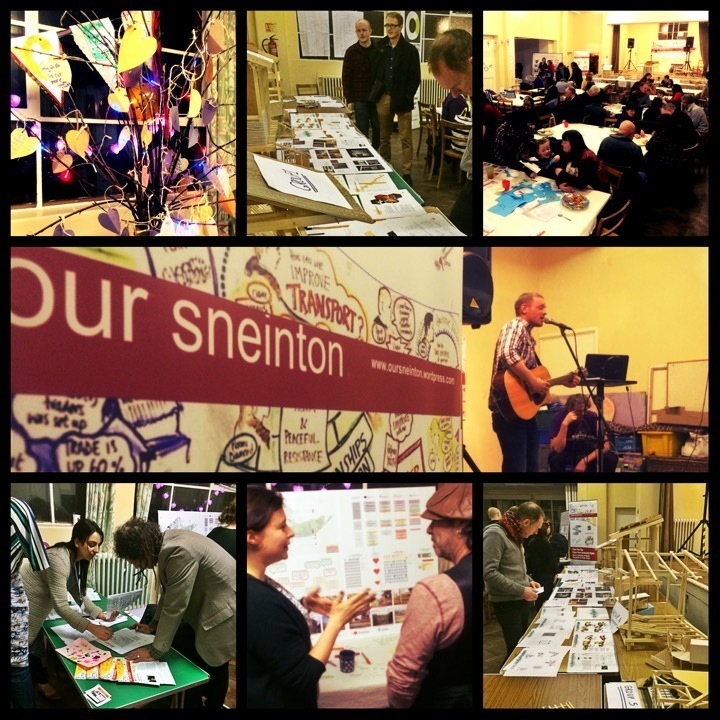 Issues such as health, the environment, development and planning, community rights were on the agenda. There were speeches and information, plenty of debate and great networking.

There was also a real sense of urgency and action too- that we have a grip on what the problems are, now it's all about prioritisation and action. 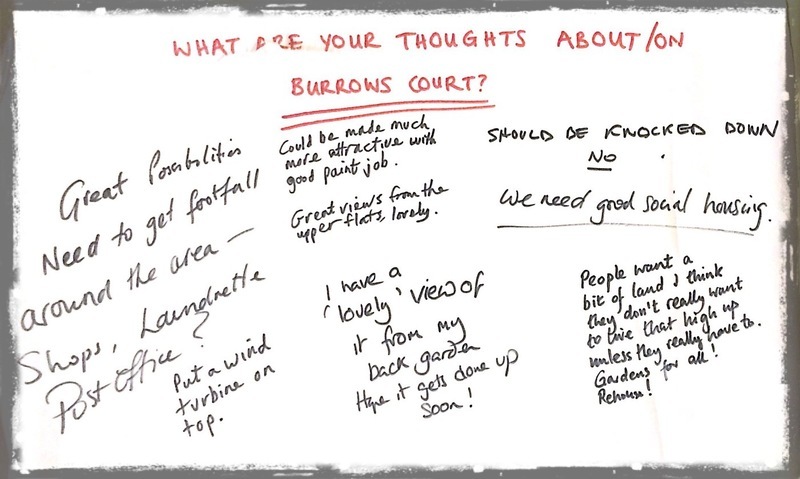 Development in Sneinton was a case in point- information displays on

all pointed towards solutions being urgently needed, and in some cases found. 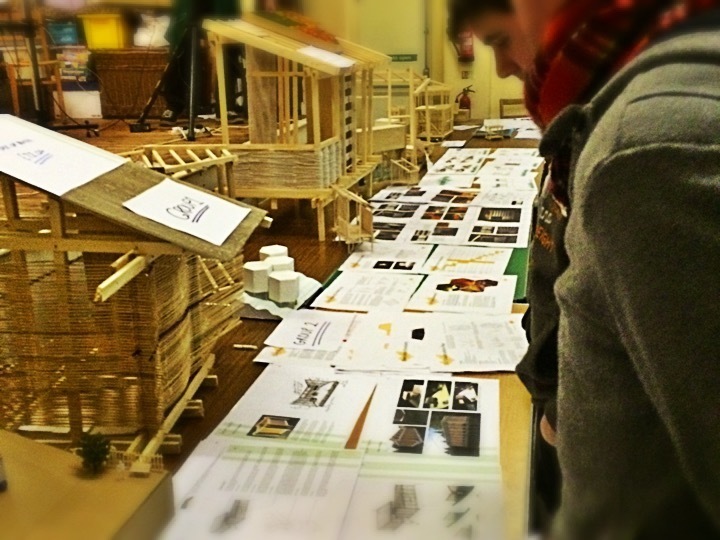 Perhaps most positive of all were the models produced by Nottingham Trent students for a proposed new building on the Growin' Spaces allotments; a small scale project but a great demonstration of practical and applied design work which will enhance our area.

It was all rounded off in Sneinton style with food, music and a good chat to old and new friends and neighbours.

Congratulations to the Our Sneinton team for putting together a seriously good event!

Built in 1967, 21 stories high on a hilltop site and containing 130 flats... Burrows Court on Windmill Lane is by far Sneinton's most prominent building. And yet it has stood empty for over a decade, passed through a series of owners' hands, become an eyesore and a thorn in the side of local residents and hosted fires, squatters, urban explorers and even featured in a gruesome murder case.

What's to become of Burrows Court? 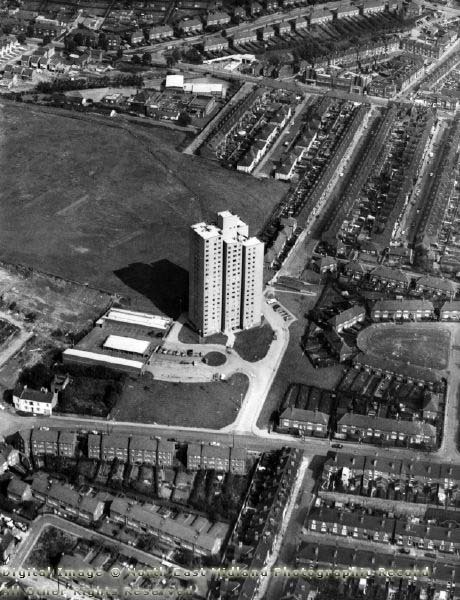 Burrows Court in 1972. Picture courtesy of Picture the Past

In the 1960s high rise buildings like Burrows Court were seen as the future of housing - clean modern and efficient buildings surrounded by fresh air and open space, replacing the grim unsanitary slums of our industrial past. Burrows Court must have seemed to some like a shining beacon showing the way to a cleaner, brighter future. It's the same thinking that saw St Anns demolished and replaced with a new estate, and which nearly drove new multi-lane highways through Sneinton and The Park Estate. According to local author Chris Matthews, Nottingham was very nearly Birmingham...

But the plans were never completed, Sneinton survived and Burrows Court now stands in stark contrast to the low rise terraced housing around. The original tower block served for nearly 27 years before undergoing a major refurbishment in 1994/5. Windows were replaced, concrete was repaired and the block was painted white, giving us the Burrows Court that now graces our skyline.

But the writing was on the wall for Burrows Court, and just ten years later, the Council took the decision to get out of the building for good. 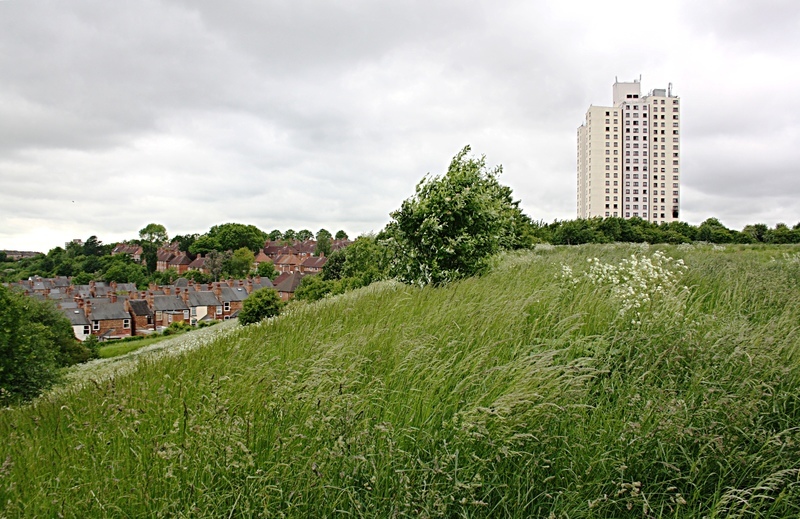 Burrows Court on the Sneinton skyline

What had gone wrong? Despite the facelift, the block had 54 vacant flats and the Council was facing a bill of £4 million in refurbishments (including an electrical upgrade) - equivalent to £30,000 per flat. It saw these refurbishments as essential if it was bring the block back in to positive use. The Council was also reporting crime, drug dealing and other antisocial behaviour in the area, which it attributed to the 'isolated location' and the design of the block and the surrounding parking structures.

In 2005 the decision was taken to sell the block off to a private developer, and re-house the existing tenants.

A planning brief was set by the Council for any new owner that would require the block to be retained rather than demolished. Some developers saw this as a block to profitability, as the number of new homes that could be built on the site was very limited. The alternative seemed to be to aim for the luxury end of the market, refurbishing the tower and building low rise housing around - perhaps in an attempt to market the project as an extension to Nottingham city centre rather than a piece of Sneinton. With this in mind, the site was sold to a developer, reportedly from Israel, and plans were drawn up for a spanking new development. This was given planning permission in 2010... and then nothing happened. 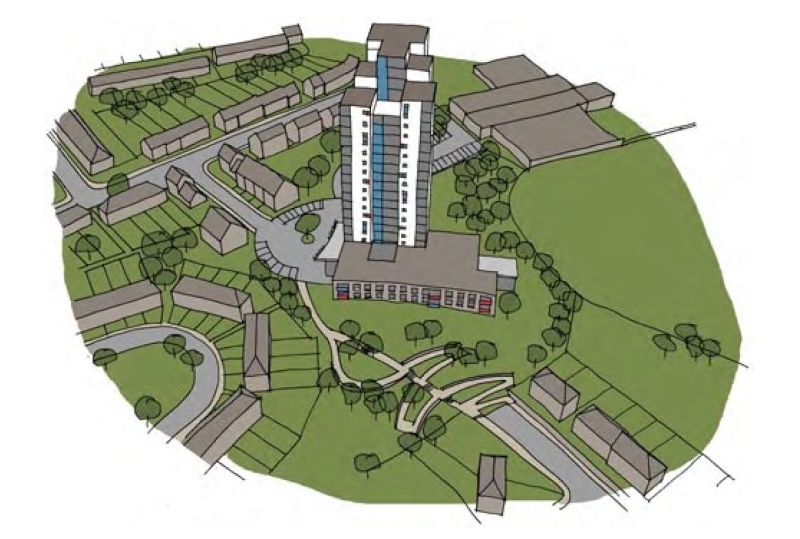 The steady decline of Burrows Court continued at the hands of vandals and squatters, becoming an notorious eyesore with broken windows and several fires. The unfortunate building also featured prominently in the gruesome Kevin Kennedy murder case, when the victim's body (or rather most of it) was found in a shallow grave next to the block. 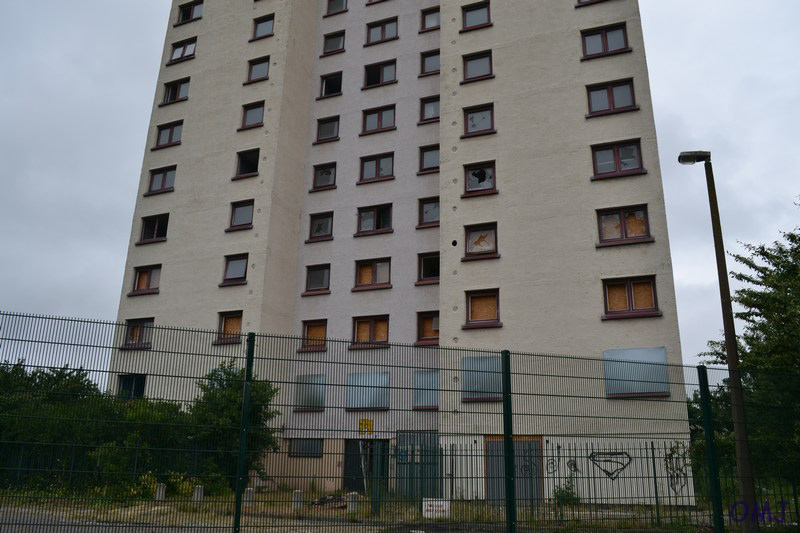 Burrows Court in 2012. Picture via DerelictPlaces.co.uk

The next attempt to bring Burrows Court back to life was made by a 12 Housing, a developer backed by sporting personalities Carl Froch, Ronnie O'Sullivan, Grant Holt and Rickie Lambert. 12 Housing specialise in student housing, and a new stripped-down planning permission was put in, to upgrade the flats with new windows and wall insulation. Permission was granted in 2013, and the future looked assured after Housing Association Tuntum got involved and HCA (Homes and Communities Agency) government funding of £2.3m appeared to be in the bag. However by 2014, Tuntum was reporting that HCA funding had been withdrawn and it was having to write off all the work it had committed to the project. Once again, Burrows Court was left to rot. 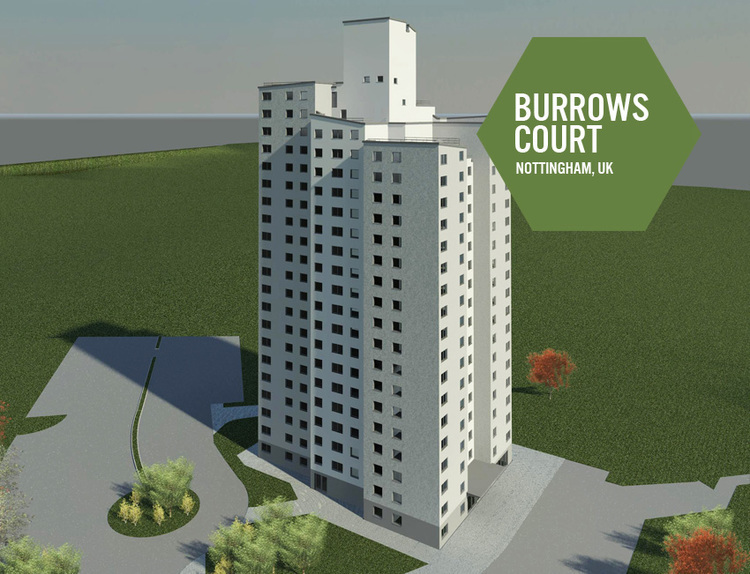 Burrows Court proposals from 2013, via 12 Housing

What's next for Burrows Court?

And now, in 2016, it is reported that a developer called "Landmark Capital Developments" are planning to spend £12m on Burrows Court, to create what the architect describes as "a contemporary residential destination for the city."  Demolition and stripping-out activity seems to have stepped up on the site recently, and a planning application was expected in January 2016 but has not yet appeared on the Council's planning portal... so watch this space...

To have a say on the future direction of planning in Sneinton, join the Sneinton Neighbourhood Forum: It's quick, easy and effective! Find out how to join here... 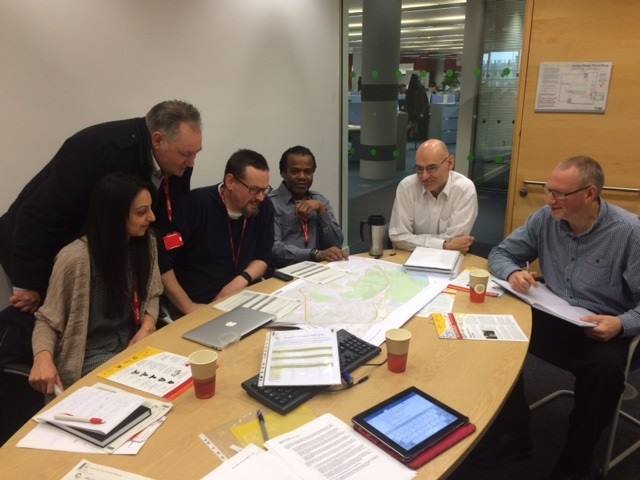 Neighbourhood Plans are all about adding local knowledge and fine grain to encourage good development that makes sense in a specific area. To work, they need to fit with and complement higher-level planning policy at National and City-wide levels.

So it's great that our working relationship with Nottingham City Council's planning team continues to be a positive one. At a recent meeting in Loxley House we were guided through the recently published Local Plan Part 2 (Land and Planning Policies) document, made aware of the current consultation on the 'Island Site' adjacent to the Neighbourhood Plan area and were able to discuss the various development sites around about. We also hope to work out a system so that we're more aware of planning application in and around the plan area so that we can comment and alert our members to consultations, and the planning team provided us with some of the census and mapping information we'll need in the coming months.

UPDATE 29/1/2016: Consultation is formally open on the Local Plan Part 2, running until March 11th 2016. Get your voice heard: http://www.nottinghamcity.gov.uk/article/30753/Consultation-on-the-Land-and-Planning-Policies-Document

To find out more, please join the Forum and/or come along to the Our Sneinton event on Feb 11th. Hope to see you there!

"It's our Sneinton" is phrase we've heard a lot from our friends and neighbours in the area, a great sign that many people feel a sense of ownership and belonging in the area. But it's often balanced by a view that we're not properly listened to when it comes to tackling local problems and making decisions about what happens next.

So "Our Sneinton" is a great name for a new project which aims to inform people in the area about their Community Rights - including the Sneinton Neighbourhood Plan - and support them to get active in the community and have a voice. 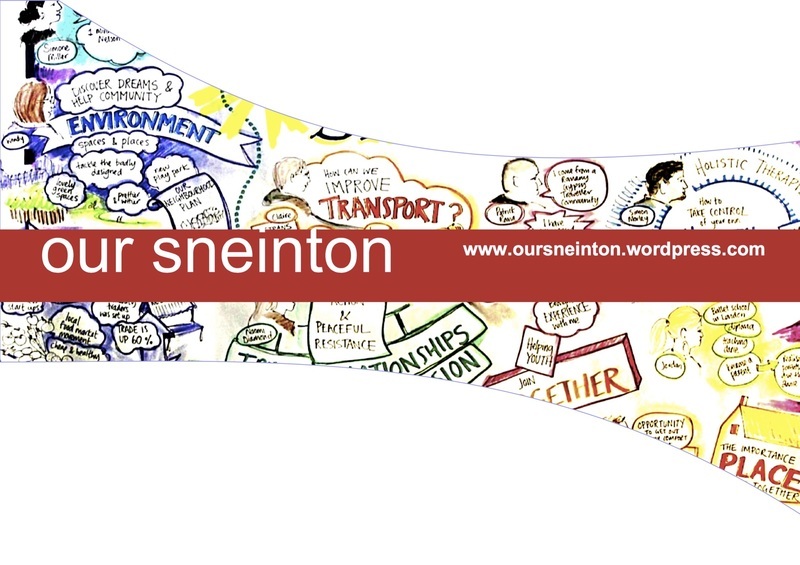 We're excited about an event that Our Sneinton are organising on February 11th 2016: It's called "I LOVE SNEINTON" and it will feature a load of great ways to find out about the progress we're making on the Neighbourhood Plan and to have your own input. 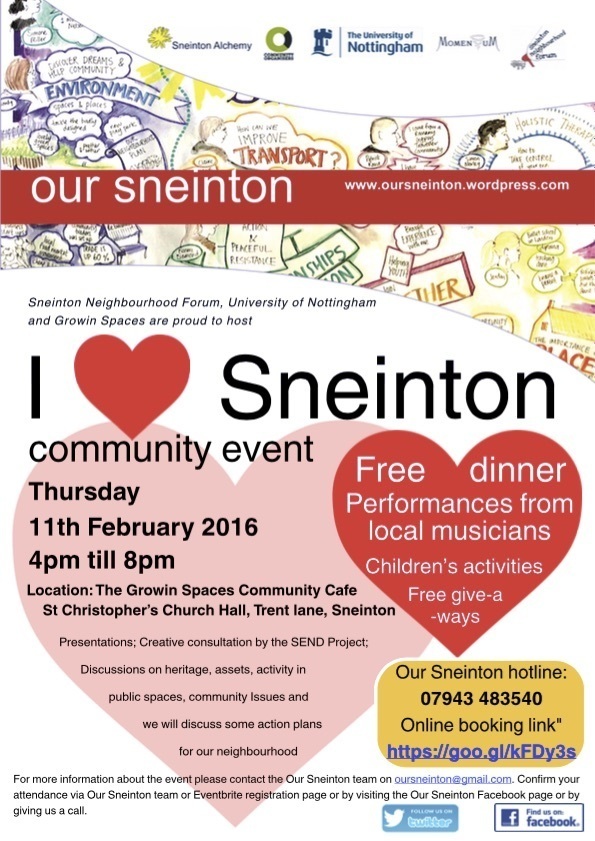 The Our Sneinton Team have been hitting the streets with their pop up booth, and out pounding the pavements to bring you their first of 3 newsletters, which you can read and download here. It's packed with great background information on Community Rights, Neighbourhood Planning and how you can get involved.

Exciting times for the Sneinton Neighbourhood as we move into the Neighbourhood Plan production stage. We need input and ideas from across Sneinton, so please join the Forum or get in touch now!

Now we have a Sneinton Neighbourhood Forum officially recognised and a plan area designated (see "Thumbs up for the Forum"), we can start work on the development of the Plan itself. We have quite a bit of the required background work as a result of our efforts to define the plan area and recruit Forum members, now we need to turn this into specific planning policies and identify priority projects - these will make up the meat of the Neighbourhood Plan itself.

We're delighted to announce a partnership with Laura Alvarez, an researcher and urban designer at the University of Nottingham (see more about her below). We are also working with Sneinton Alchemy to secure funding for their Community Organisers to support the Forum and carry out listening-based consultations. 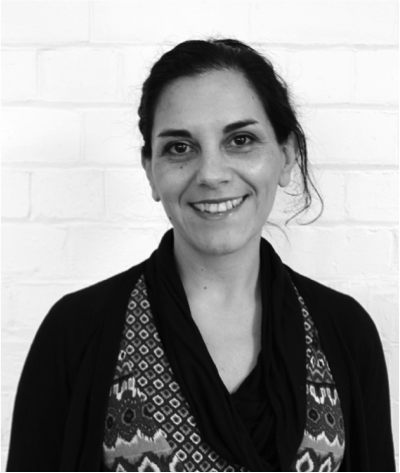 A bit about Laura:

If you see Laura around the area, please say hello! She has already over the summer produced a draft place assessment for the Forum Steering Group, having walked virtually all of our streets and by-ways to observe how the area is structured and how it works. The purpose of this is to identify key areas where positive development is needed and where current planning policy is ineffective.

Laura is also working with the Community Organiser team at Sneinton Alchemy to identify the social value of spaces and places- recognising that it's not just about what the professionals see as important, but what local people know and understand about the real workings of neighbourhoods. Sometimes, the bits of town that locals see as important are not given the priority they should be in urban planning- but we want our Neighbourhood Plan to be different.

Exciting times are ahead, and it's super important that we hear from anyone who lives and works locally and who is is interested in the future of the area. If that's you please do JOIN THE FORUM or GET IN TOUCH.

Your neighbourhood needs you!